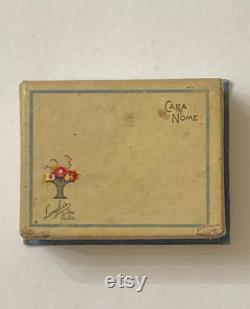 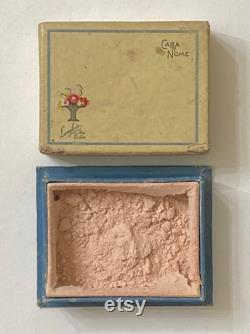 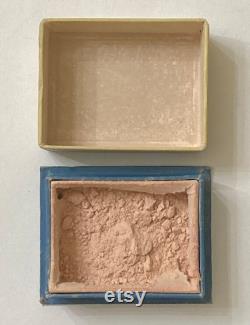 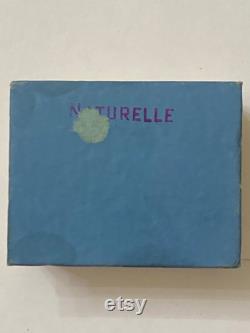 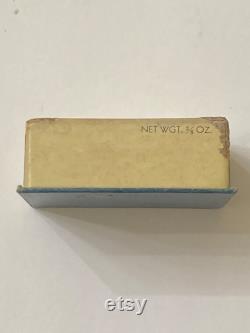 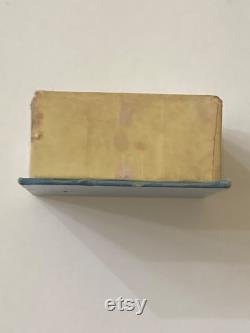 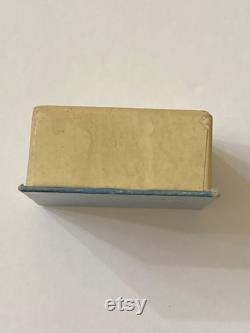 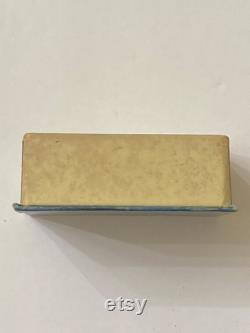 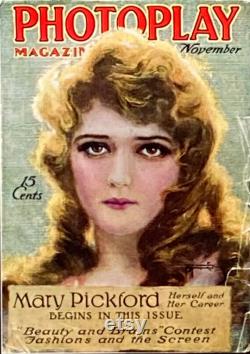 Rare vintage cara nome silver-tone metal vanity powder compact, naturelle shade. It is nice to know a little back ground information about a particular item that is part of the pleasure of collecting. One should always know something about their vintage treasures.

This is a rare vintage cara nome paper vanity powder box. Paper items deteriorate quicker than metal or plastic containers because they are more fragile and are prone to damage due to the conditions of its environment and being handled by people. Paper boxes were used up to 1919 when metal compacts were introduced by rexall. Metal compacts were strong and long lasting and they were made to be attractive and eye-catching. Some were cute, pretty, ornate, sophisticated, and elegant in order to appeal to every type of woman's taste.

Young girls loved to pull out of her small purse a dainty compact and powder her nose in public which was quite shocking at the time to do. The front of the vanity paper box features the cara nome name on the right side of the vanity and the lower left side displays à la corbeille de fleurs flower basket which is similar to a 1905 painting by pablo picasso from his rose period. The painting depicts a parisian street-girl, named "linda, " whose fate is unknown. Under-neath the basket of flowers are the words langlois new york, all of this is on top of a light cream-colored box with a thin soft blue borderline near its outer edge area.

The bottom of the vanity was also the same soft blue color and features the shade name naturelle stamped on its base. Life today still seems to be all about corporate profits. As for the name langlois on the front of the vanity, it was the last name of frank langlois who was an american perfumer that worked for the united drug company as a perfumer. French fashions and french names were the in-thing at that time period because france was considered the fashion capital of the world. No one could sue the company for misleading them because frank langlois was a real person whose french sounding name just happened to be on their products.

The united drug company did not state that their perfumes or cosmetic items were french. Advertising is still shrewd today. It is not truth in advertising it is merely creative advertising. One can also find vanity compacts from langlois, usually marked as cara nome, shari, or jonteel products.

Small paper vanity powder boxes had been used to package face powder and rouge for use in one's purse, but by 1919, the united drug company switched to metal vanity compacts. Large vanity paper powder boxes were still continued to be offered, but they were placed on a lady's vanity table and used only at home due to their size being too big to be carried in a purse. In 1919 metal compacts were introduced to the rexall drugstores. The first rexall drugstores were established in 1903.

There were 12,000 rexall drugstores across the united states from 1920 to 1977. Unfortunately, they are no longer around after being successful for many years. Each rexall store was independently owned by a local pharmacist. Today there are numerous large chains such as walgreens, duane reade, cvs, walmart, etc.

That sell drug and cosmetic products at low prices and as a result, the small mom and pop stores disappear because they can-not compete. Harry could not compete so he disappeared it's the american way it seems. Rexall had an amazing advertising history and existence even though we are talking about cara nome.

The vintage collector needs to realize how it was created by the rexall drugstore chain and why. Many young people do not realize that drugstores were an important part of the history of cosmetics and that many cosmetic items were made in the back rooms of drugstore and the distribution of them was made in the front room of the drugstore. This all happened before the creation of sephora and cosmetic companies such as helena rubinstein, elizabeth arden, max factor, etc. Most early beauty products were originally made at home in one's kitchen. As a result, drugstores started to manufacture and sell various beauty products in their drugstores.

This cara nome powder vanity box was referred to as a vanity by its women users. The word vanity refers to a sense of excessive pride and arrogance or overbearing conceit. It is an appropriate name for a product that is associated with the care of one's vanity. The word toiletry is a 15th century middle french word, diminutive form of toile was toilette, which means a small piece of cloth.

The english later borrowed the word in the 16th century and settled on the word toilet while still using the word toilette in a grooming sense. It was used to refer to a wrapper or covering for clothes and later it was used to describe a cloth that was used to place over the shoulders of a person while dressing their hair or for shaving a man's face such as a barber's cape or a hairstyling cape.

Later the term was used to refer to a cloth that covered a lady's dressing table (also called a vanity table,) or a covering of articles that were placed on the vanity table or the table itself. Finally, the word was later used to refer to the entire process of washing, grooming, and dressing of one's self, especially at the beginning of the day or for a special occasion. It was also used to refer to a bathroom (if one had indoor plumbing,) where one washed and groomed themselves and it was referred to as the toilet.

Those who did not have the funds to afford an indoor toilette were forced to use an outdoor toilette which was also called an outhouse it was a very small wooden structure that had one or two holes in a wooden plan k or seat so one could sit down over the hole in order to relieve themself. When drugstores started to sell various products that were used for washing, grooming, and taking care of one's body, such as soap, shampoo & hair pomades, toothpaste, mouthwash, shave cream, and facial cleansers other items such as face & body powders, rouge, mascaro (mascara,) lotions, perfume & cologne, nail polish & removers, toilet paper, feminine care products, cotton swabs, fingernail clippers, and ointments.

They were all placed in the toiletry section of drugstores. How did rexall drugstores start to manufacture and sell their own products it was due to one man a gentleman named louis k. Liggett in 1902 made a proposal to 40 druggists, he dreamed up the idea and asked a few druggists to invest in a drug company that would be called the united drug company or udc.

The new company would manufacture and distribute the products that it made to only its 40 drugstore members who would be the new united drug company franchise stores. The united drug company enabled its members to earn higher profits by offering its own brand of products, which were high-quality products and became known as the rexall brand products. All of the drug stores agreed to change the names of their stores and use the name rexall drugs as the name of their stores, so it would be a well-known name and trusted brand. The origin of the rexall name comes from rx to all or pharmacy care to all. Rx is derived from the latin word recipe, meaning take.

And it is also said to have evolved from the eye of horus, an egyptian symbol that was associated with healing powers. The preparation and dispensation of drugs has been around for thousands of years. The first drugstores were established in the ancient city of baghdad in the eighth century a. In 1903, the united drug company was established and it began operations at 43 leon street, boston, massachusetts this is now where northwestern university is located.

By 1929, the united drug company had 21 manufacturing plants throughout the united states to supply its members. It employed over 25,000 workers and supplied 10,000 rexall drug stores, and louis k. Liggett came up with the promotional idea of traveling across america and parts of canada by train to promote the rexall drugstore products. The train also served as a national convention place for rexall druggists to use without the cost to travel free tickets were offered to locals to see displays in the train cars that featured all of the rexall products that were available at their local rexall drug stores.

The 29,000-mile trip toured 47 of the 48 states (it missed nevada for some reason maybe it had no stores there) and the train visited parts of canada. The blue and white train of 12 air-conditioned pullman cars had displays in 4 of the cars, convention facilities for the rexall druggists were in 4 of the cars and a dining car was hauled by a streamlined 4-8-2 mohawk locomotive no. 2783 from the new york central railroad.

It is said that the promotion trip cost over a million dollars at that time period. The 9-month promotional tour took place from march to november of 1936. Louis liggett had the luxury of travelling in the rear observation car he must have had a wonderful time. In 1943/1944, liggett stepped down as the head of the united drug company and a gentleman named justin dart became the new president he was formerly with the walgreens drugstore chain.

Dart changed the name of the united drug company to the rexall drug company and moved the headquarters to los angeles. Rexall gained national exposure through its sponsorship of two famous classic american radio programs of the 1940s and 1950s, the amos and andy show and the phil harris-alice faye show. Both shows were often opened by an advertisement from an actor named griff barnett who portrayed "your rexall family druggist", and included the catch phrase good health to all from rexall. Rexall drugs also sponsored the jimmy durante show.

Each vintage cosmetic has a unique and interesting story of its own. This vintage item was previously part of the personal makeup collection of famed hollywood makeup artist ben lane. Lane was the former director of the makeup department for r. Pictures, columbia pictures, screen gems, and warner brothers pictures and warner brothers television. He was a makeup artist on a variety of classic films such as: the good earth, gunga din, show boat, and countless other films of the golden era of hollywood.

Lane also had other rare cosmetic products that were related to the beauty and film industry in his collection from his many years of working as a makeup artist in the entertainment industry of hollywood. Such face foundations from the 1935 elizabeth arden screen & stage cosmetic line few people today know that this line existed after elizabeth arden spent millions of dollars manufacturing and promoting it, in.