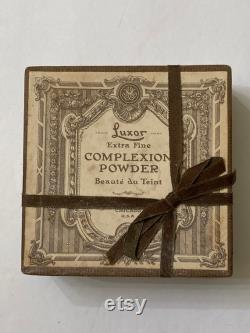 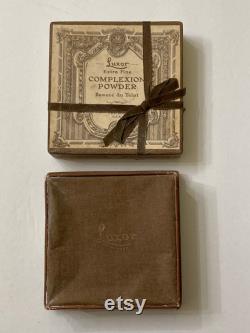 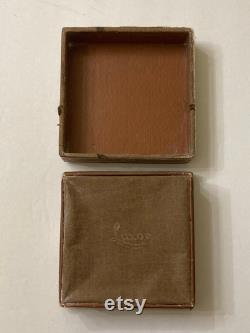 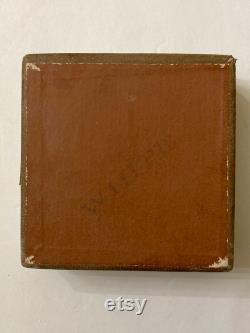 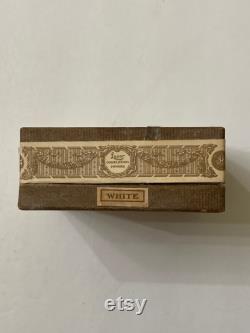 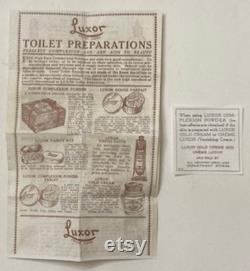 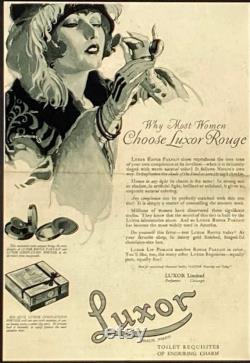 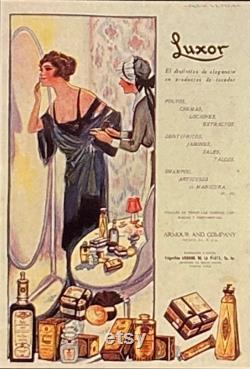 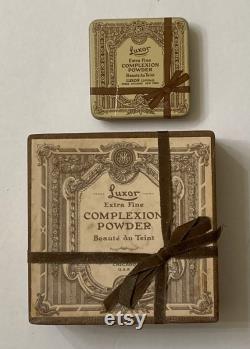 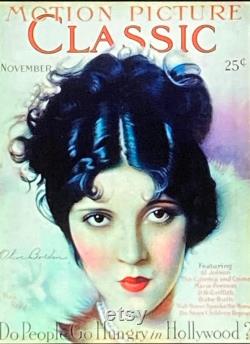 Rare vintage luxor extra fine complexion powder in a paper powder box - natural white shade - with literature. It is nice to know a little back ground information about a particular item that is part of the pleasure of collecting. One should always know something about their vintage treasures. This is a lovely vintage luxor paper box that contains luxor's extra fine complexion powder in a natural white shade. It is a full box that has not been opened.

This vintage paper powder box gives the appearance of a being a tasteful and expensive gift box due to the fact that it has an actual ribbon tied in to a bow across the top of the box. It is the same style box that appears in an early 1923 magazine advertisement. The ad states: because luxor complexion powder will not mix with moisture, it cannot become pasty --- cannot clog pores. No irritant lead or bismuth; it safely protects the most sensitive skin. This style design was so popular with young women that luxor made two versions of this style.

The small metal tin style was carried in a young girl's small purse for touch-ups when she was on the go. And the large paper box version was for use at home when she was first applying her makeup. This is the large paper box version and was used at home. If you look at the pictures with this offering, you will see the two different size containers. The smaller one is the metal tin powder container and the larger one is the paper box powder container.

This was a popular vanity box because it was cute and feminine looking and was presented like a delightful gift waiting for the woman to take it home. Because it was cute, feminine, and attractive looking, it immediately caught the attention of women. This type of luxor powder box was used at home and was not carried in a lady's purse it was simply too large to do so. It sat on a woman's vanity table in her bedroom. As a result, a powder container (in a small paper or metal box, a small dispenser tube, or a small compact,) may have been placed in her purse for outdoor powder touch-ups.

Ladies of means had a vanity table in their bedroom. One's loose powder holder was placed on the vanity table and was used to set her makeup as she sat on a cushioned stool in front of a mirror that was attached to the back of the vanity table. Such vanity tables were also referred to as a dressing table because it was where a lady sat to dress her face apply her makeup.

A vanity was a place where a woman kept her perfumes, cosmetics, and beauty implements in drawers and on top of its counter. They were used in the 17th century in france and were called a pondreuse. And in the 18th century in england and america they were called a lowboy because of their low height when one sat down. During the late art nouveau and art deco periods, vanities/dressing tables were symbols of glamour and luxury. This was due to when women saw them being used by their favorite female movie stars in the early silent films. As a result, vanity's or dressing tables became a popular item that all women desired to have when they were applying their makeup.

The term vanity sums it up best it was an item that was used to enhance one's vanity or to be more modest sounding it was simply called a dressing table where one dressed their face. Today, such vanity tables are still referred to as a vanity or a dressing table and are placed in a woman's bedroom.

In the beginning, luxor vanity cases were all made in brass in the early part of its manufacturing cosmetic products. They were made by the scovill manufacturing company that was located in waterbury, conn and had offices in boston, ma. The scovill company were specialists in making vanity cases, lipstick cases and metal containers. By 1924, they had been in the business of manufacturing brass products for 122 years.

The armour company used every part of its meat products that it could use but there was still considerable excess waste products that was difficult to get rid of. By 1910, the armour company had processed more than 12 million animals into foods and useful by-products. This huge volume of animals left an extensive amount of waste products that were not only difficult to dispose of but it was expensive to do so. As a result, philip armour hired chemists to find ways to turn his excess waste products into useful and profitable ones. Animal hides were turned into furniture products, other animal parts were made into glue, glycerine, candles, and fertilizer.

Philip armour passed away in 1901 and his son, j. Ogdon armour took over the family business and continued to try and find ways of turning every part of the animal waste products into other products. In 1902, he applied for a patent for a cake of soap. He then created a separate company called the department of soap and toilet requisites. The professional manufacturing of soap was originally started by others in 1888, so that enterprise may have given him the idea to create his own line of soap & toiletry products from his animal waste products.

It was not only an excellent way to get rid of its excess waste products but to also make a little extra revenue for the company. The luxor name was copied from the famous ancient city of luxor in egypt. In 1910, the first luxor product produced was a cold cream, which today would be referred to as a makeup remover. In 1914, their second product was a face powder and in 1915 it presented its first rouge product in a vanity box.

The luxor rouge was listed ahead of max factor, lady ester, richard hudnut, and several other well-known brands. Its bright red color attracted women because women knew that men would be attracted to them because of the bright red color.

Each vintage cosmetic has a unique and interesting story of its own. This vintage item was previously used by and was part of the personal makeup collection of famed hollywood makeup artist ben lane. Lane was the former director of the makeup department for r. Pictures, columbia pictures, screen gems, and warner brothers pictures and warner brothers television.

He was a makeup artist on a variety of classic films such as: the good earth, gunga din, show boat, and countless other films of the golden era of hollywood. His last film before his retirement was the 1981 lovable classic film annie. He was one of the original founders of the motion picture makeup artists association (mpmaa,) which later in 1937 became the iatse - local 706, makeup artists and hairstylists guild in hollywood the film and television union. He was also a member of the society of makeup artists (referred to as sma on screen credits,) and an honorary lifetime member of the international society of makeup artists also referred to as isoma it is an international association of makeup artists. Lane working and to read more about mr. Lanes wonderful career under the heading on the left titled: isoma honors. Lane had a large unique collection of vintage max factor, miners, leichner, steins, chass.

Such as face foundations from the 1935 elizabeth arden screen & stage cosmetic line few people today know that this line existed after elizabeth arden spent millions of dollars manufacturing and promoting it, in. Her quest to be the new max factor of hollywood.